I’ve been asked a few times what an “average day” is like as a new Game Designer, both by curious family who have no idea what it is I do, and by curiouser friends who have a bit of an idea.  Rather than coughing up the most cliched response—”There is no average day!”—I’ve tried to put together a summary that I hope is more satisfying.

As as general disclaimer, I can only speak for my experience working on Facebook games, and for that matter, working in a small start-up environment. Compared with bigger companies, different platforms, and other genres, mileage will most certainly vary!

9:45AM
If it happens to be Monday, it’ll be time for the weekly company meeting. Someone from each project spends a little time talking about what was accomplished last week, and what they’re tackling for the upcoming week. It’s a great way to keep up with what’s going on, especially if because no one works deeply on all the teams at once.

Before any work can be done, there’s a ritualized fueling process which needs to happen – and that requires some strong, bitter coffee. After a few gulps of scalding espresso, my brain is ready to start handling some basic functions.

After opening half a dozen browser tabs, I start going through my emails and replying where necessary. Most of them are automatic responses about resolved tickets made by the coding team, so they don’t require my attention. When that’s finished, I start catching up with whatever I was working on the day before.

10:30AM
Individual project meetings start. We use the Scrum method for keeping everyone on track, which involves brief, daily recaps in our project teams. The teams are fairly balanced: lead by a project manager and composed of one or two coders, artists, and game designers. We spend some time making tickets for our tasks and tacking them to the corkboard. Most importantly, this is when we address any blockers.

Blockers occur whenever someone can’t proceed with a priority task without some kind of work being done by another person in the team. For example, art or coding may not be able to work on a new feature without first having a schematic drafted by game design. If any blockers come up, it’s almost always critical to remove them right away.

11:00AM
Knock out any smaller, outstanding issues that need attention. Often this means updating a page on the one of the Wikis that serve as a working design document, clearing up a game design question from the programming team via Google Wave, or giving feedback on a dialog mockup created by the artists. If game design blockers came up in any of the Scrum meetings, this is a good time to work on those.

12:30PM
Lunchtime. The office breaks off in groups of three to six as people decide where and what they want to eat. My usual strategy is to hold out until the end and then tag along when the best option present itself. If it’s a particularly busy work day, however, I’ll go on a solo mission to grab a sandwich to bring back to my desk.

About once a month the game design team will also get lunch together and do some playtesting. This week we tried out 1-on-1 “duel” modes for Local No. 12’s The Metagame. I lost two of my three matches, but won against one of the game’s creators (Eric Zimmerman, of course), so I’m counting that as a small victory!

1:30PM
Hover around the office espresso machine once more. Chat with the usual coterie of caffeine-junkies, while attempting to stave off the overwhelming desire to succumb to a post-lunch nap.

1:45PM
The meat of the day’s work really begins. This means starting the tasks that can’t be segmented off neatly into one or two hour slots. For example:

6:00PM
On a normal day, this is where things start to wrap up. If there are major updates to inform people of, I’ll send out a few emails so that everyone knows the status on a project. Usually this will be addressed to one or both of the Chief Design Officers and include a quick review of what I’ve done that day, though there’s also the occasional plea begging for help and guidance.

6:30PM
Pack up my stuff and shut down my computer. Bid adieu to my coworkers—though not literally, because they are way French and would totally laugh at me—and head home. 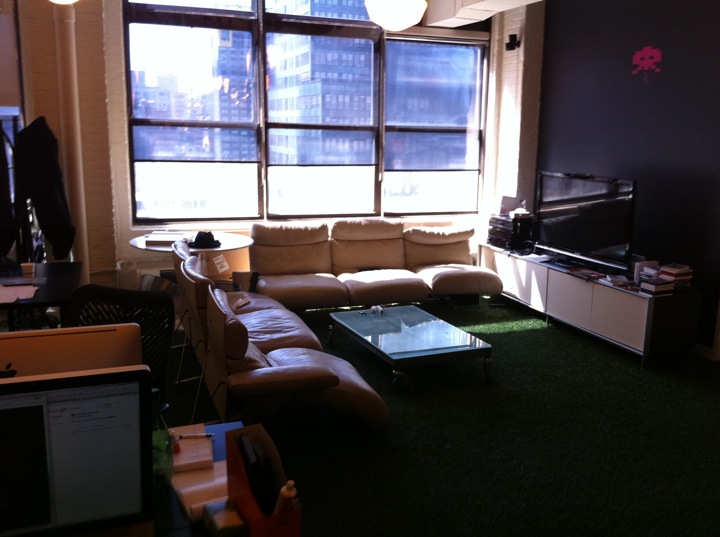