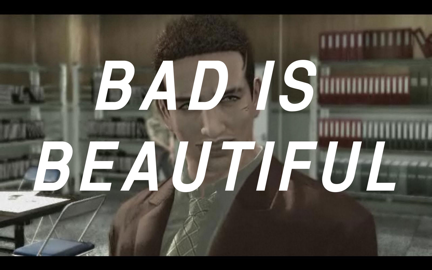 The idea of “B movies” – movies that are so conventionally bad on technical and artistic levels that they surpass “unenjoyable” and somehow end up back at “entertaining” – has existed for almost half a century. Some viewers embrace these movies because they allow them to rebel against movie snobs, and some simply find something beautiful and unique buried within the trainwreck. A pertinent quote floats around certain film circles that goes something like this: “Films should not be measured by success or critical acclaim, but simply by our affection for them.”

Bad is Beautiful looks at games in this way. It explores the idea of forgetting whether a game is “good” or “bad”, and instead encourages thinking of it as “interesting” or “not interesting”. It relishes the surreal moments that “flawed” games unintentionally create. It brings games that challenge conventional ideas of “good” out of the bargain bin and into the spotlight. It casts a skeptical eye on the Metacritic-trawling gamers of the world who stay in their safe, comfortable world of 8s, 9s and 10s and encourages them to take a risk, to explore the seedy underbelly of this art form they love so much, to diversify. It embraces the campy, the shattered, the rejected, the freakish, the dated, and the flat-out disastrous.

This is the crap avant-garde, and it’s beautiful.