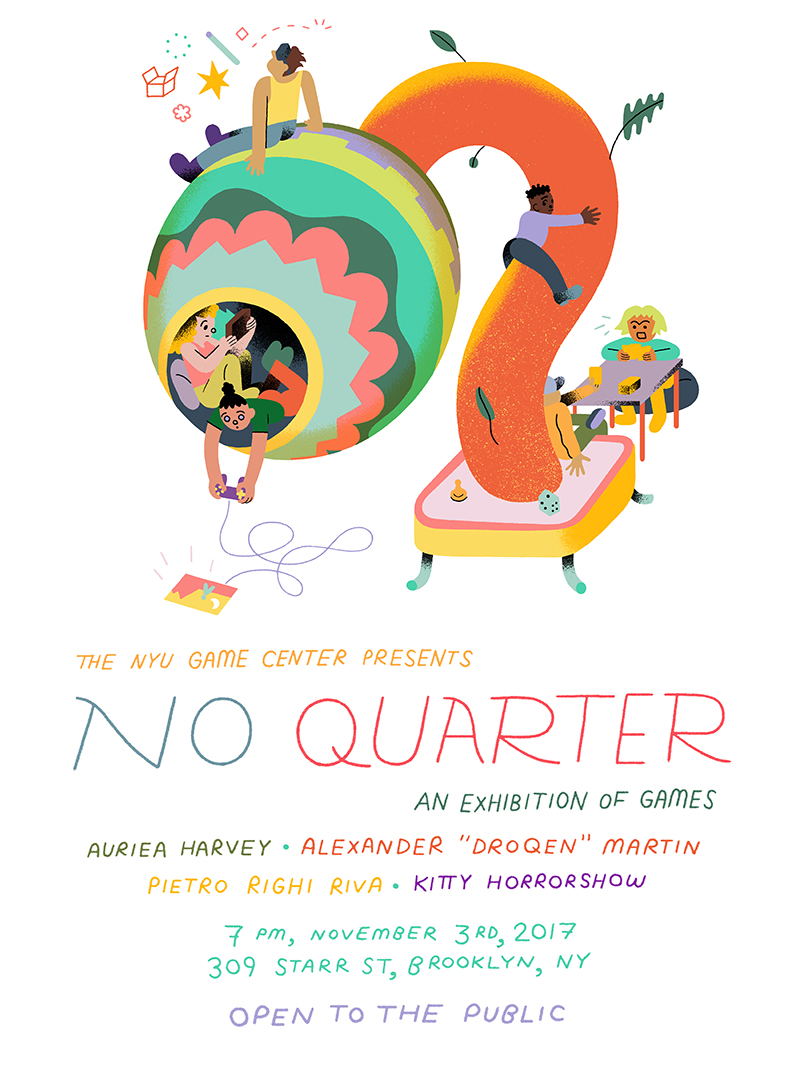 On Friday, November 3rd, join us at the Starr Space Gallery in Bushwick, Brooklyn for the 8th annual No Quarter Exhibition. Each year we commission four new games from four artists — our mission is to help nurture game design for public spaces and to support unique and bold voices in the game design community. The 2017 Exhibition will feature games by Auriea Harvey, Droqen, Pietro Righi Riva, and Kitty Horrorshow.

No Quarter is always free and open to the public. RSVP here!

The 2017 No Quarter Artists

In the weeks leading up to the show, we’ll feature an interview with each of the four commissioned artists, along with a behind the scenes look at their No Quarter game on our Twitter. Five years ago, Droqen unleashed Starseed Pilgrim upon the world: an unforgiving journey that left half of its players lost and disillusioned. It was nominated for a few awards. Today, Droqen is an independent game developer and one quarter of the Gloam Collective. He continues working very hard to evoke feelings that were uninvited and will go unloved.

Robert Yang, No Quarter 2017 Curator: Hey Droqen! What are you making for No Quarter?
Droqen: I’m making a videogame in which everyone is trying to climb to the top of this tower, but you all rely on one another to do so. I guess that makes it sound like a pretty cooperative game, and it is, in a way, but in order for one person to triumph someone else has to sacrifice; you can all win, but nobody wins together.

What was your process? How is your concept changing as you work on it?
The game started out as a weird multiplayer city-simulator where each person had different stakes in the city’s growth. At this point the whole notion of a city’s growth has been cut from it, because it sort of demanded a weird amount of understanding from players who might only be playing for a very short time…

Do you have any favorite No Quarter games from the past?
I’ve played and loved Nidhogg, TENNNES, Killer Queen. I never got to play Consentacle, which I’m sad about, and am going to play someday.

After No Quarter, are you staying around in NYC for a bit? If so, what would you like to do / what are you looking forward to doing or seeing?
I’m going straight home! I visited NYC for a couple days some months ago for a show at Babycastles and also ended up walking around the city and going to Kenka… that was a good time. I’ve been fired up from working on this game and I want to work more on new things, on this, on everything.

Thanks for your time! See you in a few weeks!

Droqen is developing a game tentatively called Everybody Climbs for No Quarter. Take a look at the game’s dev blog here. You can also follow Droqen on Twitter.