The NYU Game Center was founded in 2008 within an emerging community of innovative and passionate gamemakers building the momentum to make New York City a worldwide center for games culture. At the department’s inception, along with an offering of undergraduate classes and the Open Library, the NYU Game Center created a series of events that brought together the NYC community to discuss, play, and create games with the clear goal to strengthen the momentous energy around the games and the games industry in New York.

As the program has grown, the NYU Game Center has become an important hub for the game community in New York City, creating dynamic, inclusive spaces for independent artists, AAA developers, competitive eSports players, and game academics alike to come together and celebrate game design.

Today, as the NYC game scene flourishes, many of the NYU Game Center’s events, like No Quarter, the Lecture Series, and PRACTICE are renowned gatherings that galvanize the scene. The Game Center aims to advance the state of the art and to support groups and organizations all over NYC who are doing important work to bring the culture around games to new and exciting places.

The Conversation About Games

High-level talks, deep discussions, and the development of discourse around games are happening in a big way in New York City.

Since 2008, the NYU Game Center Lecture Series has brought some of the most interesting game designers, academics, and critics to New York City to share their unique approach to games. Talks have ranged from panels on journalism, to in-depth discussions of design decisions, to making money as an independent designer. The Lecture Series has become a staple of the New York game scene, and the packed talks have become a monthly raison d’etre for gamemakers to come together and learn, discuss, and play.

The NYU Game Center also hosts a series of conversational talks, inviting the public and our students to have more intimate experiences with industry veterans, up-and-coming designers as well as speakers from a range of backgrounds. Speakers have ranged from Mary Pilon, author of the definitive history of Monopoly, to Janet Murray, Mary Flanagan, & Ian Bogost discussing the past 20 years in game studies, to Thomas Bender and Jacob Bakkila, the artists behind the @horse_ebooks Twitter and Pronunciation Book Youtube channel who created an avant-garde FMV adventure, Bear Sterns Bravo.

Outside of the Game Center, New York City is brimming with events related to games. Our friends at the indie game gallery Babycastles curate a wide variety of workshops, exhibitions, and events. At the Museum of the Moving Image, the East Coast’s IndieCade Festival holds a three-day long conference which brings a diverse cross section of some of the biggest names in independent games and relative unknown developers together to present on the most timely topics in games. The NYC IGDA also organizes numerous community-based events for local developers. A strong culture of playtesting is the backbone of the New York City game scene.

Every Thursday, the NYU Game Center opens its doors to the game community in New York City  – students, professionals, or hobbyists – to playtest games. Local studios set-up prototypes alongside Game Center students, groups of high school students play the latest prototypes from NYC developers, and everyone works together to make each other’s games better.

Playtest Thursday is one of the best ways to see what the students and developers in New York City are working on, and anyone is free to drop by the NYU Game Center on Thursdays from 5:30-7:30PM to check it out.

Outside of the Game Center, designers for particular genres of games are getting together to playtest all the time. If you want to make board games, big games, games for learning, games with alternative controllers, or anything in between, it’s not hard to find a group that meets to playtest weekly or monthly. From experiencing a multimedia interactive theater piece to challenging some of the best Ryu’s in the country, New York City’s got the competitive scene, the artistic scene, and everything in between covered.

In the spring, some of the best fighting game players in the northeast gather at the NYU Game Center for Spring Fighter, a unique event that combines high-level tournament play with high-level discourse about fighting games. We invite a player, designer, and/or a community organizer to speak at the tournament about their experiences, play-styles, and thoughts on the games, past speakers include Seth Killian, Daigo Umehara, and Ricky Ortiz. The talks are paired with tournaments in Street Fighter, Ultimate Marvel vs Capcom, BlazBlue, Super Smash Melee, and more. Spring Fighter is only one of the many tournaments that go on around the city, to learn more, check out the hub of fighting games in NYC, Next Level.

Each year, the NYU Game Center hosts No Quarter, a premiere of games that have been commissioned by the NYU Game Center from game designers and developers all over the world to make a game specifically for a gallery context. Now after our the sixth year, hundreds of people turn out for the exhibition that has launched some of the most successful local multiplayer games in recent history including Nidhogg, BaraBariBall, Hokra, and Killer Queen. No Quarter challenges the standard of social and multiplayer design and brings one of the most exciting nights in indie games to New York City. 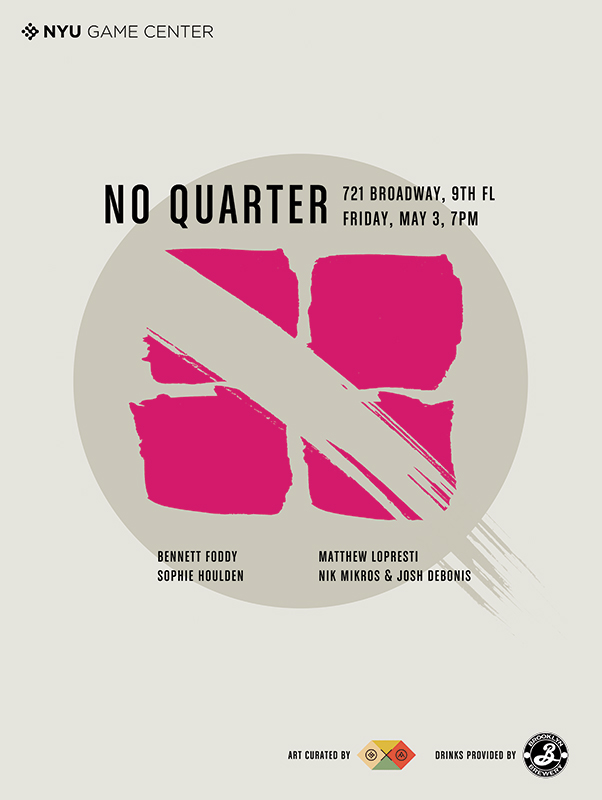 No one is doing more interesting exhibition work than Babycastles. The small group of curators, designers, and artists opened its first permanent gallery space in 2014, and regularly holds exhibitions of games that have ranged from the Muslim experience to PC games remade with full body, physical controllers. The seminal Brooklyn DIY music venue Death by Audio was home to “Deathmatch by Audio Arcade” a collection of local multiplayer games in self-built arcade cabinets, including MFA game, Field-1. The Deathmatch by Audio Arcade was the seed that became Wonderville, an indie arcade gallery and bar. Additionally, the Museum of the Moving Image is home to a collection of arcade cabinets and regularly curates exhibitions of digital games.

One of North America’s largest Global Game Jam sites is here at the NYU Game Center. The Global Game Jam connects designers from all over the northeast with students here at the Game Center, for 2 days of fast and loose game design. The NYU Game Center’s location has led to successful projects coming out of NYC, including Itay Keren’s “Mushroom 11” (which went on to win an Apple Design Award) and Nina Freeman’s “how do you Do It?“. The Global Game Jam is just one game making event among a sea of jams, co-working spaces, and design competitions. There’s always somewhere to make a game in New York!

It is a great time to be making games in New York City. NYC is home to a vibrant group of independent developers, small studios, freelance designers, media companies, and large AAA companies all making games. In 2016, Empire State Development helped establish three Digital Gaming Hubs (The NYU Game Center included) around the state of New York, to create jobs and encourage growth in the game development sector.

Post-graduation, many Game Center alumni have remained in the city to put their skills to work as designers, developers, educators, critics, curators, and more. Our graduates are making games with all sorts of companies located in NYC, from AAA studios like Avalanche, to mobile and social game studios like Arkadium, to hardware makers like Looking Glass Factory. Students have also found success working as game designers in companies expanding their interactive offerings like The New York Times and Scholastic as well as in museums such as the American Museum of Natural History.  As a major cultural hub for performance, media, and arts, our students are creating new markets and opportunities for game making.

NYU Game Center Event Sponsors share our mission of making New York the best place in the world to make games. Their financial contributions allow the Game Center to offer an events calendar that would otherwise be impossible to maintain, and they help our students start their careers in top studios. Even our sponsors are distinctly New York — the diversity of scales, platforms, and genres that our sponsors are making games for reflects the variety of approaches to games that are viable here. Currently, the NYU Game Center is sponsored by Fresh Planet, Play Dots Inc., Take-Two Interactive, and Empire State Development.

Previous sponsors include Activision, Vicarious Visions, Viacom NEXT, Avalanche, Arkadium, Gigantic Mechanic, and SMASHWORX. Our sponsors are a great example of the New York City game scene working together to make the events and games in New York City the best in the world!

IndieCade is switching things up with nine full days of 24-hour programming for their 2020 online festival celebrating independent ...Read More

MFA second-year Will Pang will be debuting new work at his solo show, The Revival. From the exhibition statement: ...Read More

Each year at the Game Developers Conference, Intel celebrates the incredible work happening at Universities around th e country. This ...Read More